This week I’ve been lucky enough to attend a fabulous summer school at the University of Cambridge, organised by Literature Cambridge. The ‘Fictions of Home’ course looks at the meaning of ‘house’ and ‘home’ across literature from the early nineteenth century to the present day, charting it in the work of Jane Austen, Charles Dickens, Katherine Mansfield, and Virginia Woolf, and ending with contemporary refugee writers like Viet Thanh Nguyen.

The week is made up of lectures, Cambridge-style seminars and supervision sessions, outings to Girton College, the Wren Library and, my personal favourite, Kettle’s Yard. Throughout the week, we’ll attempt to uncover how literature bears witness to one of the great themes of our time: the meanings of home. 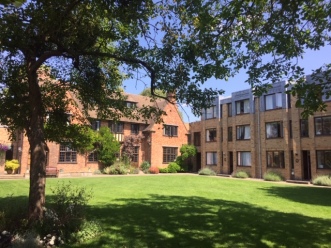 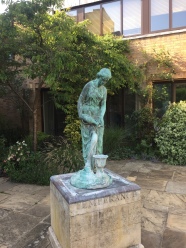 Still recovering from a delicious welcome feast the night before, we’re up bright and early for our first lecture, delivered by the incredible academic, journalist, publisher and LGBT+ campaigner, Alison Hennegan.

In her paper, entitled ‘From House to Home’, Alison shared her thoughts on the changing associations of ‘home’ across the late eighteenth and nineteenth centuries. In the Victorian period, the home became a symbol of permanency and solace, and a heavily gendered space. Prior to this, however, the home (or, more appropriately, the house) didn’t have these associations; it wasn’t the cosy, private, familial space we might consider it today. Instead, the house was a far more theatrical space connected to ideas of lineage, reputation and public facade. Talking about the wife and children being mere chattels of the husband at this time, I was particularly drawn to Alison’s discussion of female virtue as a form of currency.

This brilliant lecture sparked debate in the seminar about different types of creativity: marriage and motherhood versus writing. And whether women really could have it all…

With the weather getting ever hotter, we didn’t let the sunshine distract us from Corinna Russell’s lecture on ‘Household Words and Houselessness’. Corinna is an Emmanuel College Fellow and researches the literature and thought of the late eighteenth and early nineteenth centuries, with a particular interest in the ways in which literary language patterns and forms ideas.

Her fascinating lecture explored what we would now term ‘homelessness’ in Charles Dickens’ great novel, David Copperfield. She introduced us to the idea that the Victorian home was an extempore, clandestine or defamiliar space, using the lens of Freud’s ‘unheimlich’ to consider how Dickens’ characters play at keeping house.

Her paper sparked much discussion in the supervision around the emerging instability of nineteenth-century society, rendered so by increased mobility and unstable capitalism, and the ways in which this shift infused many novels of this time with sinister, anonymous strangers, fraudsters and tricksters to challenge the powers that be. 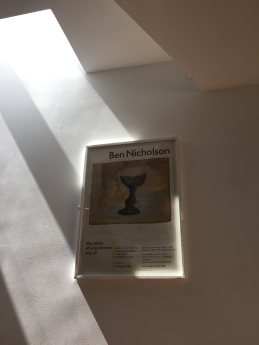 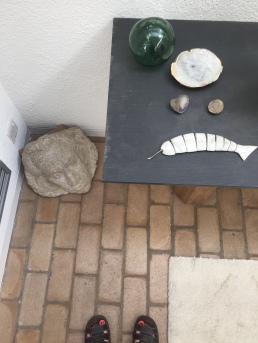 In the afternoon, we visited one of Cambridge’s most famous homes, Kettle’s Yard. Once the home of Jim Ede, curator of the Tate Gallery in the twenties and thirties, and his wife Helen, who moved to Cambridge in the fifties, it is a string of four connected houses filled with their remarkable collection of art. When he lived there, Ede opened up the house each afternoon to give visitors, particularly students living in the city, a personal tour of the collection.

Paintings by the likes of Ben and Winifred Nicholson, Alfred Wallis, Christopher Wood, David Jones and Joan Miro line the walls, and almost every corner is filled with a sculpture by Henri Gaudier-Brzeska, Constantin Brancusi, Henry Moore or Barbara Hepworth. Dotted amongst these are pebbles, feathers and shells that fuse art and found objects.

Visiting this afternoon, we could see that the gallery still today fulfils Ede’s vision that the place should not be ‘an art gallery or a museum’ nor ‘simply a collection of works reflecting [his] taste’. Instead, Kettle’s Yard is

rather, a continuing way of life from these last fifty years, in which stray objects, stones, glass, pictures, sculpture, in light and in space, have been use to make manifest the underlying stability. 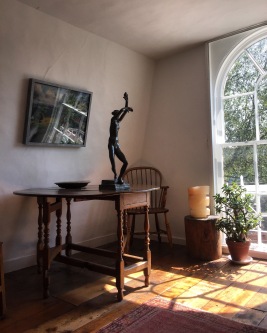 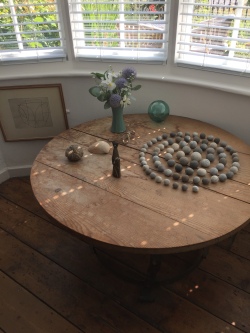 Today we’re lucky enough to have Jane Potter jet over (less jet, more stifling hot 3 hour bus journey… but we won’t mention that) from Oxford Brooks to deliver a lecture on one of my favourite novels, Virginia Woolf’s Mrs Dalloway.

In her lecture on the ‘Soldier’s Home? The Post-War World in Mrs Dalloway‘, Jane discussed how each how a house experienced in the present can trigger memories of previous homes that then come alive in the novel, bringing with them idea of a gilded pre-war world now shattered for the characters of Woolf’s narrative. Drawing on Woolf’s references to World War I, Jane noted the number of damaged men returning from the war to find their notion of home almost unrecognisable. And, building on this, suggested that perhaps the characters Septimus Smith and Evans could be based on the famous war-time coupling Siegfried Sassoon and Wilfred Owen.

Our supervision elicited a lively debate on Woolf’s women, as we dwelt on the different forms of mothering enacted in the novel. We compared Clarissa Dalloway’s ‘brittle’ relationship with her daughter, Elizabeth, and the double-edged jealousy she sees in Miss Kilman’s relationship with her. This is perhaps more explicitly linked to ideas of home through the mothering of Reizia towards her husband Septimus, as she navigates this caring role in a place far, far away from where she calls home. 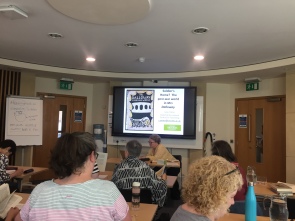 This afternoon we were treated to a private tour of Trinity College’s Wren Library by librarian Nicolas Bell. Designed by Christopher Wren in 1676 and completed in 1695, it is a stunning piece of architecture filled with imposing busts of classical and canonical  writers (all great writers are male, it seems), and stuffed to the rafters with manuscripts, books and archive material dating back centuries! 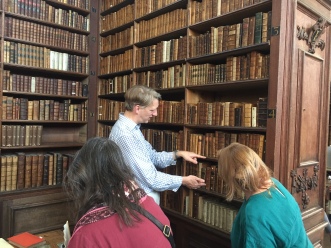 The librarian also read us some extracts from Virginia Woolf’s A Room of One’s Own, where she is admonished for walking on the (still) forbidden grass at a fictional Oxbridge college.

It was thus that I found myself walking with extreme rapidity across a grass plot. Instantly a man’s figure rose to intercept me. Nor did I at first understand that the gesticulations of a curious-looking object, in a cut-away coat and evening shirt, were aimed at me. His face expressed horror and indignation. Instinct rather than reason came to my help, he was a Beadle; I was a woman. This was the turf; there was the path. Only the Fellows and Scholars are allowed here; the gravel is the place for me. Such thoughts were the work of a moment.

– Virginia Woolf, A Room of One’s Own

Today we moved onto one of modernism’s greatest writers: Katherine Mansfield. Isobel Maddison popped over from Lucy Cavendish College to deliver an incredible lecture called ‘In Search of Home in the Writing of Katherine Mansfield’.

Isobel offered an in-depth analysis of the different forms of home and homemaking in several of Mansfield’s short stories, focusing particularly on the literary and anthropological construct of liminality. This could not have been more pertinent to my own research, which looks at how bathrooms often act as liminal spaces in the work of many early twentieth-century women writers.

During her lecture, Isobel analysed the importance of surface and performance in the middle-class family home in stories like ‘Bliss’ and ‘A Cup of Tea’ to explore the way in which  Mansfield reveals or dismantles traditional (and often restrictive) domestic structures for women. 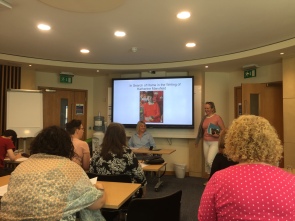 This afternoon, Alison Hennegan gave us a tour of Girton College which she attended as an undergraduate in the sixties. It was fascinating to be shown around by someone who had such a personal connection and, indeed, passion for the once women-only college.

Alison took us to the room in which Woolf delivered her famous lecture on ‘Women and Fiction’, part of a tour of women’s colleges in October 1928. This would later morph into A Room of One’s Own, the essay in which she details the struggles that women writers have faced throughout history.

For the last day of our course we moved from the twentieth to the twenty first century to look at some fiction in which the idea of home is intensely important. Our final lecture was on Vietnamese refugee writing and was delivered by the course director, Trudi Tate.

In her paper, she considered how mobile or immobile notions of home can be for refugees, particularly focusing on the writing of Viet Thanh Nguyen and the collections he has edited. It was astonishing to hear that approximately 1 million people left Vietnam after the war, and around 200,000 died at sea. Different aspects of this are explored in Nguyen’s collection The Refugees, but Trudi particularly focused on the silence (enforced or otherwise) that constantly infuses these stories. She noted that the right to speak freely – something we might take for granted – is something that, even today, not everyone has.

This evening was our final evening together and we were lucky enough to have author and biographer Ann Kennedy Smith come to our formal dinner at Darwin College to talk to us about ‘The women who changed Cambridge: Anne Clough, Ida Darwin and Helen Gladstone’. Ann weaved together the interconnected stories of some of the women who ‘invaded’ Cambridge both as students and wives of professors in the late 1800s. Hearing about the legacies of these incredible women was a fantastic way to end a week of discussions about home, belonging and, for my research particularly, how women navigate the patriarchal domestic sphere. 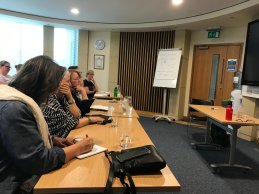 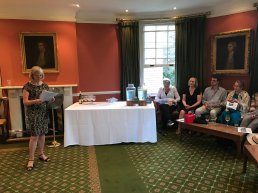 For me, this week has been an amazing opportunity to immerse myself in an intensive study of the meaning of home in literature, art and beyond. Not only has it informed my ideas, but, through the many conversations and lectures, has also allowed me to develop new perspectives on texts I thought I knew.

I’d really like to thank Trudi Tate and Alison Hennegan for their support, ideas and nurturing this week, as well as the wonderful international cohort of students that shared so openly their own thoughts. I’d also like to thank Midlands4Cities whose funding made this possible for me.

One Reply to “Fictions of Home: Summer School”